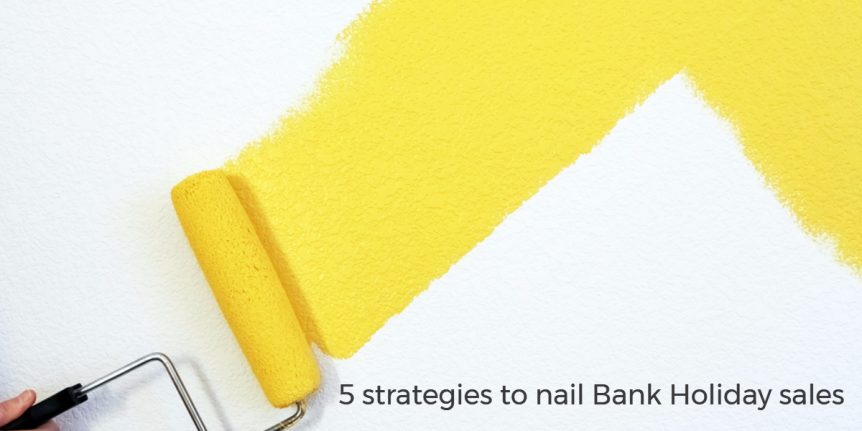 According to recent research from VISA, retail sales have been falling for six months, with consumers shifting spend from retail to leisure, an alarming trend for retailers. Many retailers hoped that the well-timed Spring bank holidays would lead to a boost in sales, but initial analysis has suggested a less than rosy outlook. The British Retail Consortium (BRC) found that Easter did boost short-term sales but look to longer-term signs of a slowdown.

With one last bank holiday left in the first half of 2017, and consumer spending slowing down, retailers must make the most of this key sales opportunity before a potential dry spell until later in the year. So what are consumers looking to buy across the bank holiday, and how can retailers optimise their sales?

In May 2016, eBay found that the most searches were done in home and garden, with heavy spending on garden furniture, lawnmowers, saws and sofas. However, BDO found that high street sales for homeware fell across April of the same year, despite the timely bank holiday. The exception was in store sales, with average spending tending to be higher in store. Channels which can support driving consumers in store should be deployed to make the most of this opportunity.

Toys and children clothing has also seen a historical boost across Spring Bank Holidays, with parents perhaps more focused on entertaining the kids at home, as more and more choose to take a staycation.

KPMG found that food and drink sales soared across the first two Spring Bank Holidays, suggesting entertaining remains at the heart of bank holiday. At ESBConnect, we have seen similar trends, with wine and beer sales soaring among the brands we work with, driving an uplift in sales of 67% from March to April 2017.

Our customer acquisition platform, which uses email as the primary channel, saw an average Click Through Rate of 7% across April 2017 for retail campaigns, increasing to 9% over Bank Holiday dates. Shwoing that although consumer spending overall is decreasing, email can drive increased response from consumers – with the right offer.

So which strategies can retailers use to optimise campaign performance over Spring Bank Holidays?

1. Timing is key
Advertiser must target people in the lead up to bank holiday purchases, when they are doing online research and planning for their purchases. Online channels can drive awareness in advance, combined with targeted ‘voucher downloads’ to drive people in-store. We found brands who ran email campaigns on the Thursday/Friday prior to bank holiday weekend, drove 26% more clicks and 17% more conversions than those who limited their campaigns to the Bank Holiday weekend itself.

2. Last minute delivery, delivers
Last minute delivery offers on food and drink via emails can triple your average conversion rates. We drove an average of 300 orders per email campaign in the run up to the last Spring Bank Holiday in 2016, representing a significant last minute boost to sales.

3. Hit the home improvers
Consumers are aware this is last the last bank holiday for a while and will be gearing up to make bigger purchases across this weekend, in anticipation of big discounts from retailers. Retailers can capiltalise on this by communicating attractive offers on big-ticket items several days out from the Bank Holiday.

4. Think outside of the normal sales channels
Retailer listings on Amazon and eBay are extremely competitive over bank holiday weekend. Likewise, click costs on PPC tend to rise over this weekend. Look for other channels to generate reach and awareness. Email is not always a go-to channel for many advertisers, but it can easily drive a retailer 5,000-10,000 targeted clicks across a single weekend, at the fraction of the cost of display, PCC and social.

5. Go early and finish late
Everyone is discounting, so the competition for share of consumer spend will be high. Cover all your bases by going early and offering a discount on the Friday before Bank Holiday running through to Bank Holiday Monday and beyond. As a similar comparison, we saw advertisers who ran offers across the whole of Black Friday week drive as much 38% more clicks than those who ran just on Black Friday.

In fact our clients see a high percentage of purchase transactions taking place on a Monday, despite the consumer having clicked originally on the email over the weekend – use the go early and finish late method to maximise sales.

Plus, ensure, you are offering a simple offer with real value to the consumer. Don’t over complicate it!

With only a few days to go until the last bank holiday of the first half of 2017, speak to us today to see how email can help boost your sales.